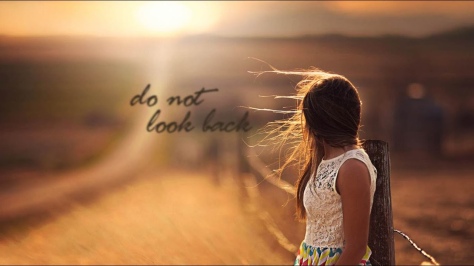 Just a little reminder today to “Not look back.” Don’t camp where you were once hurt. It’s important to deal with our brokenness and pain but NOT to camp there. Don’t get stuck in the middle my friend. The middle has nothing for you.

“Don’t get stuck in the middle. We have to learn to go the full journey. Someone needs us on the other side of the shore line.” Charlotte Gambill

In Genesis, God reveals to Abraham that Sodom and Gomorrah are to be destroyed for their grave sins. Abraham pleads for the lives of any righteous people living there, especially the lives of his nephew, Lot, and his family. God said He would spare the cities if 10 righteous people can be found. So the LORD sent two angels to Lot in Sodom but are met with an angry, wicked mob who are then struck blind by the angels. Finding only Lot and his family as righteous among them, the angels warn Lot to quickly leave the city and they said “Run for your lives! Don’t look back and don’t stop in the valley. Run to the hills, so that you won’t be killed.”

But Lot’s wife did, and she became a pillar of salt.

Have you stopped in the valley?

Do you keep looking back?

I don’t know about you but I sure don’t want to be a pillar of salt, lol. Nope! Nope! Nope!

Don’t look back and don’t get stuck at the point of your pain. That my friend, I have done, and it’s not a fun place to be. I have been stuck from things of my past and present hurts.

Just a side note, the Bible has amazing accounts and stories in it from murder, hate, jealousy, and even sex. Yep! Sex is in the Bible. Get in the Word😊

Another cool story is the man at the Pool of Bethesda, John 5. “Soon another Feast came around and Jesus was back in Jerusalem. Near the Sheep Gate in Jerusalem there was a pool, called Bethesda, with five alcoves. Hundreds of sick people; blind, crippled, paralyzed were in these alcoves. One man had been an invalid there for thirty-eight years. When Jesus saw him stretched out by the pool and knew how long he had been there, he said, “Do you want to get well?”

The sick man said, “Sir, when the water is stirred, I don’t have anybody to put me in the pool. By the time I get there, somebody else is already in.”

Sounds like a pity party to me….I’ve had a few of those myself.

Jesus said, “Get up, take your bed, and start walking.” The man was healed on the spot. He picked up his bed and walked off.

That’s what I’m talking about…he was healed and he got about His Father’s business and he told of what Jesus has done for him.

That man sat there for 38 years!!! I’d like to think that in 38 years I could’ve wiggled myself to that pool and just fell into it, LOL. I mean that’s a really, really, long time! 38 years???

But isn’t that what we do sometimes, we get stuck somewhere at the point of our pain and we become paralyzed. I know I’ve been there. Truth is I’ve been there to long myself with some things. But you don’t want to be that man 38 years later and your still camped there.

That’s where I’m headed….to Bethesda! The house of mercy, the place of flowing water.

“I know it hurts precious one. I know your wounds. I know your disappointments. I’ve seen the betrayals. I’ve seen your tears. I see your brokenness. But what you didn’t realize all along is that I was with you through the pain, and I am here to make it right. I will work it all out, all the pain, the hurt, the disappointment, the betrayals ALL for your good because your are precious in My sight and I love you. I will give you beauty for ashes. But you have to let go of those ashes, leave them behind so I can resurrect you with newness of life. All those things the enemy tried to steal, kill, and destroy, I got your back. I and the God of restoration. No weapon formed against you will prosper. Remember Lot’s wife, and Don’t look back and don’t get stuck in the middle at the point of your pain. Your destiny is ahead, and I am leading you toward your dreams. I have a hope and a future for you. I am able to do immeasurably more than all you can ask, hope for, or imagine.

Hope y’all have a blessed and wonderful day! Remember, YOU ARE BEAUTIFUL, YOU ARE AWESOME, YOU ARE CHOSEN, AND YOU ARE AN OVERCOMER! YOU ARE A TROPHY OF GRACE!